I was considering calling this post “Hello Geneva” after my older post “Hello Shanghai” (when I moved to Shanghai), but I’m not really living in Geneva. And when you’re living in one European country, you’re basically living in all of them anyway.
I’ve switched continents again and am getting acclimatized to those typical new-continent things (ie. French keyboards that switch the Y and the Z. So frustrating). This time, I’ve accepted a traineeship at the ICRC (International Committee of the Red Cross). I actually applied for this job back in February but forgot about it during the oncoming COVID mania, treeplanting, finishing my MA (subtle brag – I’m kinda proud of this one), and backpacking around Vancouver Island. IT TURNS OUT the ICRC can still hire internationally because they’re an essential international organization. I don’t have the exact details, but got an impression of “We’re the Red Cross – pandemic or not, if we go down, so does a whole lot of armed violence worldwide.” They even hired me despite me failing to wake up on time for the interview (time zone mistake). But the interview went well and we all seemed to “click” pretty well. Next thing I knew, I was moving to Switzerland for the year!
But I’m actually living in France in a tiny town called Saint Genis. It’s about a 20-minute walk to the Swiss border and a 1-hour bus ride or 45min bike ride to the ICRC in Geneva. The border is essentially non-existent; there are buildings and I’ve heard rumours that border guards do occasionally come out of them, but I haven’t seen one yet. I’ll update if that changes. Apparently, there was a brief moment during the height of COVID when the border was actually closed, which was a stark reminder to many that these are in fact two separate countries.
So I am a frontalier  - a cross-border worker. This is mostly because Geneva is really bloody expensive – the second most expensive city in Europe actually. After Zurich. Friggin Switzerland. A fellow intern commented, “I’ve come to the realization that a moderately priced meal is anything under 70 francs” (which is roughly $100). On an intern’s salary, this will not do. Thankfully, it’s significantly cheaper to live in France than in Switzerland – like, thousands of dollars cheaper. The paperwork’s more complicated, but finding wonderfully welcoming friends with a spare room and no interest in paperwork can alleviate this. Also, this small French town next to the countryside is wonderfully breathable compared to rich-and-stuffy Geneva.
Here's some beautiful photos of said rich-and-stuffy Geneva:

CHEESE, BREAD, AND CHOCOLATE. Ahh there is the most abundant selection of all three at remarkable prices (here in Saint Genis – not Geneva). In the Carrefour (France’s version of a Food Basics or Zehrs), imagine an entire aisle lined with cheese on both sides! And what a selection of blue cheeses – I could try a new one every week and not finish until the end of my year here. Of course, my town has multiple boulangeries (bread shops), a fromagerie (cheese shop), a chocolatier (guess), and a patisserie (pastry shop). Wonderbread does not exist.
HOWEVER, I have to say, there seems to be a slight drawback of all the delicious boulangeries and patisseries. These shops must have to order their ingredients from fancy places because the baking section of the grocery store is sorely lacking. It’s about one-tenth the size of the cheese section and mostly contains cake decorating supplies. I also couldn’t find vanilla extract but a did find a surprising amount of raw vanilla bean, vanilla sugar, and tiny vials of vanilla-flavoured bourbon. After re-converting the oven in my house from an extra storage space for plates into an actual oven, I managed to make a tasty apple crisp from all the wild apples growing everywhere. The apples are, ironically, called “Reignette du Canada” or, colloquially, “pomme du Canada” (transl. Canadian apple) but it’s actually an older French cultivar that pretty much only grows in France.
I have started a cheese list of ones I’ve tried and ones I hope to try.
A cool fact I’ve learned about French cheeses is the policies in place designating the origin of traditional specialties. No longer does “AOC” only refer to Alexandria Ocasio Cortez; it also refers to “Appelation d’Origine Controlee.” All AOC products are made in their traditional locations following traditional methods with traditional ingredients. And the regions are very proud of their AOCs. Apparently, wine AOCs are an even bigger deal, but whatever - cheese is better than wine anyway.

There are a few little things I have to get used to (aside from the bloody Y and Z switch on my work laptop’s French keyboard). For example, I’m used to waiting to cross the street until there’s enough room to run across between cars. Here, it seems like everyone stops for you whether crossing or not. It’s strange overcoming a guilty feeling that I’m cutting someone off by just walking across but, alas, they will stop anyway and probably get annoyed if I wait for them.

Banking is such a pain! Warning: this paragraph will be long, sarcastic, and grumpy. It took multiple trips to sort out my bus pass but at least that was able to sort out; opening a Swiss bank account is a complex ball game and half of it depends on which bankers you talk to. With COVID, you need to book an appointment online rather than just show up (understandably). The first time I call the bank where I want to open an account, they tell me I can’t open I bank account unless I give proof of residence in Switzerland, or a French tax number if I’m living in France. Terrified that I’ll have to either register for taxes in France or move to Geneva, I start researching French taxes and exclusions for frontaliers. In exasperation, I message the ICRC Associates WhatsApp group. Their response: there are two locations of a particular bank where previous ICRC interns reported opening accounts with just their passport and copy of their ICRC contract. I try to book an appointment but don’t receive the confirmation so I rebook at the other location. No confirmation. I’m not going to traipse all the way to the bank for an unconfirmed appointment, so I call the local branch.
Now let’s have a moment dedicated to European bureaucracy. We exchange pleasantries in French, but when I ask to communicate in English (I’m mean c’mon, banking is serious and I don’t want to risk my poor French), she immediately responds in clear Standard English “No, sorry, this is a French-only line, but I can give you the number of the English line.” Sure. She gives me the number. I call. The man who answers the line has a thick German accent – the English line is based in Zurich. I have Geneva-specific questions, so he puts me on hold while he calls to check with the local branch I had just called. Questions answered, he asks what time would work best for the appointment. I respond, and he puts me on hold again so he can confirm with that local branch again. Appointment booked (thank God). Two hours later, I get a call from the local Geneva branch asking, completely in English, to change the appointment time. Sure. I just want that appointment and I want it in English so I know what I’m signing for. Jesus bloody Christ.
OKAY back to nice things. THERE IS AN AUTOMATED COW in Saint Genis. Fresh daily milk from a tap, just remember to BYOB (bring your own bottle).

Silly Anneke Moment Turned Into Adventure: During Week Two, when I was feeling pretty comfortable with my route to and from work, I let myself fall asleep on the bus and woke up in a completely different place. Luckily, it was still within the zone I’d downloaded in offline Google Maps so I just wandered through the Swiss (lol I didn’t even make it to France) countryside for a bit until I reach where I’d started again. On the journey, though, I passed around the World Health Organization; fascinating to think how central this organization has been throughout this entire pandemic while walking around it (it’s very large – lots of time to think about this while walking around). 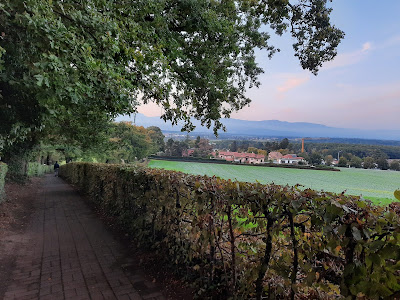 Silly Anneke Moment Turned Educational: I went to a café while working from home one day (living with a family with a baby can be less-than-quiet). This meant gasp speaking in French with an actual French person! The woman who owns the café is very kind and often helps foreigners with their French, but there’s still the minor anxiety of “I’m about to immerse myself in a language that no my own,” which feels kinda like trespassing on someone else’s property/language while also being very bad at it. That doesn’t make much sense but neither does the anxiety really.
So I enter the café. I’m the only customer (thank God). We greet each other but I don’t catch what she says except “voulais.” S’all good – probably asking what I want.
“Une café au lait, s’il vous plait.”
She responds with something else I don’t catch while gesturing to the chairs. I discard the second phrase I’d been mentally repeating to myself (“est-ce qu’il y a une table a la bas?”) since the café is empty. I sit down. All goes well, the coffee arrives, and smiles all around. Time to ask for the wifi password.
“Es-ce que je peux aller au l’internet?”
She starts gesturing and describing the way somewhere so I follow, only to realize she’s directing me to the washroom. (Anneke mumbling “l’internet” sounds a lot like “le toilet”).
“Non… le… l’internet… le wifi? …Le wifi?” I stumble my way around.
“Ahh le mot de passe?” she laughs.
“Oui,” I breathe a sigh of relief, the not-actually-traumatic trauma passed. She follows me back to my laptop and spells out the password in English. Fifteenish minutes later, I consider asking for the password again to connect my phone. But this has been a lot of social interaction with strangers in French for one day.

Before the new lockdown (worth another post in itself), I met a French friend and we were able to go on bike rides to explore the area. He showed me where to find some amaaazing old castles and ruins.

And there you have it. Hopefully my next post has more entertaining life and COVID things rather than boring explanation. Hope you enjoyed the update!
Fabulously banged out by Anneke

Anneke
Hey! This is my blog of everything, ranging from updates from time abroad, stories from tree planting, ramblings about novels, to general hobbies. Enjoy!

Blessed are the weird people - poets, misfits, writers, mystics, painters, troubadours - for they teach us to see the world through different eyes.
- Jacob Nordby
Each of us is willed. Each of us is loved. Each of us is necessary.
- Pope Benedict XVI
Everyone's fucked up. You've just gotta decide what kinda fucked up you're into.
- unknown
I've done something I thought I'd never do. I let go of grudges, I forgave, I healed, I made new. And just look at the blessing I've received today. How soothing.
- unknown

The world in which you were born is just one model of reality. DIFFERENT CULTURES ARE NOT FAILED ATTEMPTS AT BEING YOU. They are unique manifestations of the human spirit.
- Wade Davis